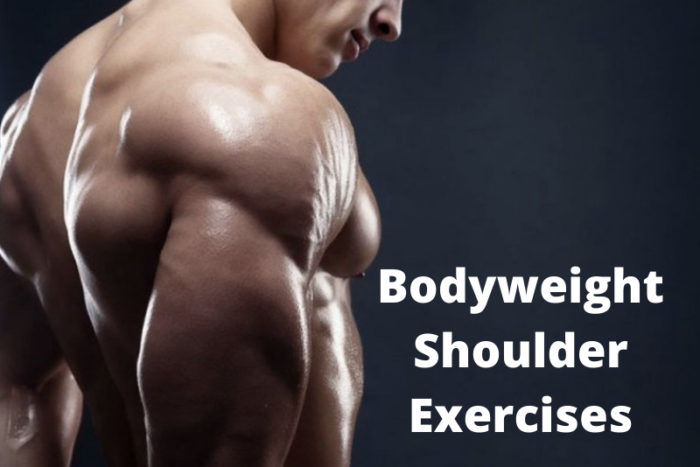 Welcome to my article about bodyweight shoulder exercises.

I’m sure many of you are wondering whether it’s actually possible to get a great set of delts without setting foot in the gym.

I mean, you can hit just about every other muscle with bodyweight exercises, but when it comes to getting massive shoulders you may be left a little stumped.

However, it’s not exactly easy to recreate most of these movements without weights.

So, I wanted to look into how to work the delts without weights and look to create an ultimate bodyweight workout for the shoulders.

I guess the most famous of all bodyweight shoulder exercises is the handstand push up, but considering I can barely hold a handstand for more than 3 seconds it’s an exercise I have avoided for a long, long time.

However, as it turns out the vast majority of people perform the handstand push up with their feet supported against a wall.

This makes a lot of sense, as performing them “wall-free” is an extremely advanced exercise and it would probably help if you’re an Olympic athlete too (don’t worry, I know many “normal” people out there can perform them too) .

Next we have the pike push up, which I’d typically perform with my feet on a raised platform, such as a bench or a Swiss ball.

With that said, as a beginner you can complete pike push ups with your feet on the floor. You would initially start off in the yoga-inspired downward facing dog position.

From here I also discovered the push back push up.

With a standard push up you always keep your body horizontal and perpendicular to the floor, but with the push back push up, as the name suggests, you push back and almost end the move in a hybrid downward dog position.

(Don’t worry, you’ll get to see all these exercises in the video below).

Now these are all great exercises, but there’s a lot of basic pushing going on here, so you would mainly be working the front shoulders, and to some extent the lateral and anterior head of the shoulder as well.

Don’t get me wrong, performing just these 3 bodyweight exercises for your shoulders will no doubt produce a great set of delts, but you’re not really hitting every single head of the shoulders.

I’ve also seen various exercises, such as the “Y”, “T” and “L” positions, which will work the rhomboids, plus the upper and lower traps.

With that said, these exercises in my mind are more specifically stretches. So, they may produce some separation and definition, but I’m not so sure about building muscle and size.

For the first bodyweight shoulder workout I thought I’d turn to one of my favourite YouTubers, namely, Jeff Cavaliere.

Jeff, of Athlean-X fame, is someone who I have followed for a number of years now and I have definitely learned a lot from him.

His Athlean-X program is about producing a complete body transformation in 90 days, and in my mind his exercises and workouts are aimed at the intermediate to advanced person (although he does provide some great information and exercises for beginners too).

I will admit that Jeff does have a tendency to “chat a lot” in his YouTube videos and I’ve often seen comments bemoaning this fact, BUT the guy knows what he’s talking about, so I say, let him speak.

I have completed many of his workouts (with or without weights) over the years and have absolutely loved them.

There are still various exercises and workouts that I first learned from him many years ago that I still perform to this day.

Plus, when you look at Jeff’s body composition, especially for a guy in his 40’s, it’s a testament to how good his stuff really is.

Now, before I go any further I can’t exactly ignore the Jeff Cavaliere “Fake Weights” scandal that has besieged YouTube and various Social Media platforms during the summer months of 2020.

Jeff was accused of using fake weights when perfoming various exercises, such as the bench press and deadlift.

Many people have posted “proof” that Jeff is using fake weights in many of his AthleanX exercise videos.

I’ve seen people say that some weight plates look at lot smaller when compared to others of the same weight.

Then there’s the fact that the barbell doesn’t make the right kind of impact (or noise) when touching the ground.

We also have “proof” that the bar should bend when performing an exercise with that amount of weight, but it doesn’t.

Any finally, that a man of Jeff’s size and stature, and more importantly, his weight, shouldn’t be performing certain exercises that easily with that amount of weight on the bar, irrespective of how strong he is.

For me, whether Jeff has used “fake weights” or not, well to be honest I don’t really care, and I don’t want to involve myself in all this “controversy”.

As far as I’m concerned, Jeff Cavaliere has been producing superb workout programs and YouTube videos for years.

I have followed through on much of his advice over the years and pretty much everything I have learned from him WORKS.

Plus, he looks in absolutely great shape, and his body would shame the vast majority of guys half his age.

And that’s all I have to say on the matter.

Anyway back to some bodyweight shoulder exercises now.

I’ve included a video below from Jeff, which is only about 4 and a half minutes long (so clearly without his usual amount of excessive talking).

I can best describe the exercises as a push back push up, a type of single arm plank with rotation, and a reverse iron cross.

For the next bodyweight shoulder workout I have turned to another favourite of mine, stack.com.

Once again, I have followed, read, and watched literally hundreds of videos produced by Stack over the years.

This is definitely a website that provides lots of great information and I have tried many of their workouts for myself.

They have listed many of the exercises that I already knew about (and provided videos for you to follow as well).

The handstand push up, the pike push up, the push back push up, a YTL circuit, plus an exercise that I’d never considered before, but one that makes a lot of sense – the reverse burpee.

You can check out the full workout here.

For the third bunch of bodyweight shoulder exercises I’d like to introduce, Austin Dunham.

Admittedly, even though Austin has been producing great YouTube videos for many years, has a ton of subscribers, and literally millions and millions of YouTube views, I have only very recently come across him.

However, from what I have seen of him so far, he provides some great workout tutorials and he encompasses training for beginners, intermediates and even for those of you who are advanced (definitely not me, but I’m getting there).

Austin has provided his list of the best bodyweight shoulder exercises, and although there are a few familiar “faces” in there, you’ll also find some new exercises too.

I especially like how he has incorporated some work for the rear delts that doesn’t simply involve what I call stretching movements.

These are numerous row variations, and whereas you may consider these lat exercises I can definitely see how they work the back of the shoulders, the rhomboids and traps as well.

I’m not going to lie, but the name of this bodyweight shoulder exercise, “The Angry Cat Walk” is what first attracted me to it.

Actually, if I’m going to be completely honest, I ignored watching videos about this exercise for a number of years because I thought it was just going to be a compilation of aggressive felines attacking their owners – how wrong could I be?

I must admit that after trying the angry cat walk it is something that I have incorporated into my shoulder workouts, as I find it a great way to fire up my delts.

For many years I wasn’t really a fan of bodyweight training, but I think (just like many people) that’s because I typically stuck with the most basic variations of exercises.

I didn’t actually have enough knowledge and imagination to come up with my own exercises and I wrongly assumed that you’d never be able to build any muscle or strength through bodyweight exercises alone.

This was especially true when it came to training shoulders.

However, I’ll hold my hands up and admit I was very wrong – I stand corrected.

I hope you enjoy trying out these great variations of bodyweight shoulder exercises.