If you’re female, born in the last 3 decades, into your fitness and looking good, then I’m guessing you know exactly who Chloe Ting is.

For the rest of us, being aware of who this Fitness, YouTube Influencer is could be very hit-or-miss.

Admittedly, I have heard of Chloe Ting, I have watched many of her videos, and really appreciate the fact that she provides completely free workouts via her website and her YouTube channel.

In fact, just a quick glance at it today (see below) reveals that she’s already garnered almost 240,000,000 views at the time of writing.

So, as a guy, who regularly goes to the gym (but has been ignoring his abs for a while), but is really into his exercise, I decided to give the Chloe Ting 2 week abs program a go.

I think it’s only fair (for those of you not in the know) to find out a little more about Chloe Ting.

Chloe is an Australian national. Born in Brunei on 9 April 1986, she moved to Melbourne at the age of 16.

She initially worked as an actuarial analyst, but started her YouTube channel in 2011 while still working in statistics.

Chloe’s YouTube channel actually started off with her discussing fashion and travel, although the entire focus changed to fitness in 2017.

Chloe Ting’s video, “Get Abs in Two Weeks”, went viral as I mentioned, and literally millions of other bloggers, vloggers, and YouTubers tried the workout, and then posted their results.

Amazingly, many of these people claimed to have produced great abs in just 2 weeks, or at the very least had started showing some definition that wasn’t there before (this is what piqued my interest, and prompted me into giving the Chloe Ting 2 week abs workout a go).

With that said, due to quarantine and lockdown regulations due to Covid-19 during the spring and summer (of 2020), Chloe released her “Two Week Shred Challenge” via TikTok.

Needless to say, this was yet another smash hit.

What is the Chloe Ting 2 Week Abs Workout?

The supersets you will complete are:

Firstly, I will say that “abs” having never really been my thing.

A guy who has spent most of his life exercising, but was never really worried about abs, that can’t be right, can’t it?

Don’t get me wrong, I’ve had 6-pack abs at various stages in my life, although I put this down to great conditioning work and extremely well-controlled nutrition more than anything else.

However, as a self-confessed “Foodie”, who no longer wants to worry about watching what he eats all the time, I’m just happy if my stomach is fairly flat, with slight definition, and doesn’t stick out further than my chest (LOL, good old dad bod/beer belly).

With that said, I tend to perform a lot of hip and glute work nowadays (not very manly I know) due to previous injuries, and I notice that this does give me some great core definition.

I have mentioned in previous articles that I suffered to herniated discs in my lower spine in 2004.

I also have a history of bulging discs following on from my initial injury.

I eventually discovered this was due to have weak core, hip, glute and hamstring muscles.

Since around 2017 it has been important for me to perform regular strength work in these areas on a regular basis.

However, and don’t ask me why, as I have no clue – my core work always seems to get left behind and forgotten.

Nevertheless, the core is an integral part of the human body and the way the body functions, so being strong in this area is a must.

So, every once in a while I have to suck it up and do some ab work.

How Did I Get On With The Chloe Ting 2 Week Abs Program?

My initial thoughts when I looked at Chloe’s 2 week ab program was that it ticked all the boxes as far as I was concerned. 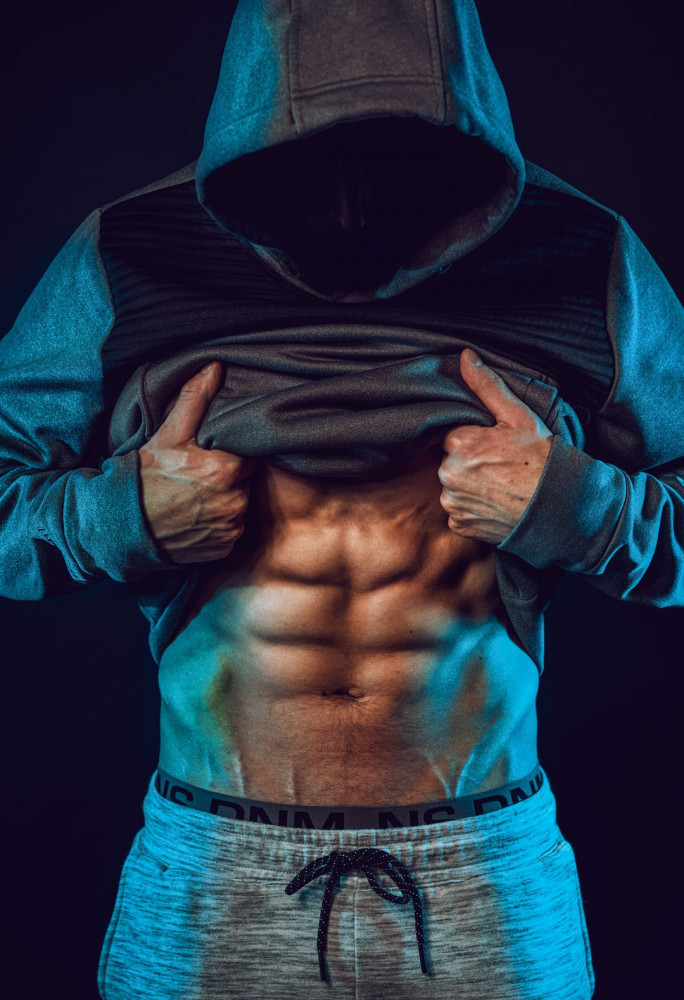 There were exercises that concentrated on the upper abs, lower abs, transverse abdominals, obliques, and the lower back – Perfect.

However, there’s nothing new here, but there doesn’t need to be. Just good, honest, hard-working, core exercises that will help to strengthen and firm up the midsection.

The timed supersets with very low amounts of rest in-between is something that I knew I would potentially struggle with, and I’ll openly admit I wasn’t looking forward to them.

This is the type of workout where you’ll start to really feel your abs “burning” about 2 minutes in and then be watching the clock until the 10-minute workout is finally complete.

Funnily enough, I actually started training core with someone in the gym last August, just about the same time as Chloe’s smash hit above first came out.

A gym-friend (we all have friends in separate areas of our life, don’t we?), Emma, usually always finished her workouts with 10 minutes of ab and core training, so I decided to join her for most of August and September (2019).

Emma is in fantastic shape and would even give most guys a run for their money when it comes to lifting weights, plus her conditioning and core work is always on-point. She trains “like you’re supposed to”.

I now recognise many of the exercises we were doing last year, as those that you’ll find in Chloe’s ab workout, although Emma did tell me that she usually gets her ideas off Instagram.

So, how did I fair with the 2 week ab workout?

Well, I’ve not actually finished it yet.

In fact, today marks day 7 for me.

I was going to video myself completing the workout, but thought I’d perform it a couple of times at least just to get the hang of it.

After Day 1 and Day 2 of doing the workout, all thoughts of uploading a video of me suffering and in pain (not real pain you understand) – went out the window.

For now, you’ll just have to use your imagination.

Yes, it’s a great workout, and will work extremely well and strengthen the core (which is the first stage to getting a great set of abs).

You should be performing the 10-minute workout 6 days a week, for 2 weeks (even Chloe mentions that you should always have a rest day at least once a week, more if required).

However, Chloe also provides other workouts that you should be doing to supplement the ab workout, so in reality you should be exercising between 25-50 minutes a day (following Chloe’s workout program).

For me, I could really feel my abs in the morning on Day 2 just before my workout, and to be honest I didn’t think I was going to make it through.

Nevertheless, I soldiered on and got through Day 2 as well.

As the week has progressed my midsection definitely feels tighter, I’m getting through the workout better (I occasionally had to stop before the 30-second buzzer went off), and although I’m not sure if it’s just a trick of the light, but perhaps my abs are also a little flatter.

But, It’s hard to come to any solid conclusions after just a week.

Additionally, completing Chloe’s ab workout has also inspired me somewhat over the past week.

I typically work out 5-6 times a week anyway, a mixture of weights and bodyweight training, and I do lots of walking, but I have really been watching what I eat during the last 7 days, and I must admit that my diet has been very good.

I think it must be a psychological thing – I’m doing a 2-week ab workout, so don’t ruin it by eating pizza and burgers all week.

As to all the claims that literally millions of people were making last year when the video first came out (as well as posting “proof”) – that they had flattened their abs and made some great definition in just 14 days, well, let’s just say the jury’s still out on that one.

Is It Possible To Get Defined Abs in Just 2 Weeks?

Okay, I’ve said that there were millions of bloggers, vloggers, and YouTubers who were posting “evidence” that they had indeed managed to produce a great set of abs in just 2 weeks.

But, let’s get one thing straight, ALL of these people (mainly female) were already in pretty damn good shape to start off with.

I would hazard a guess that the “average” person who attempted Chloe Ting’s 2 week ab challenge, and then posted about it, typically go to the gym or workout very regularly, eat a well-balanced and nutritious diet at least 5 days a week, and weren’t carrying a great deal of body fat to start off with.

If this sounds like you, then YES it is certainly possible to produce defined abs in 14 days.

However, the problem is that many people who specifically want to target their abs are doing so (and not to put too fine a point on it) because their abs are currently hidden under a layer of fat.

Let me tell you now that having a great set of abs is probably 80%-90% of what goes on in the kitchen.

If you haven’t got your diet and nutrition sorted then there is absolutely no point in even aiming for a 6-pack.

Chloe does have some great diet and nutrition tips on her YouTube channel and website as well.

Secondly, your workouts should be more focused on raising your metabolism, burning fat, and producing the EPOC (Excess Post-Exercise Oxygen Consumption) effect.

This is where you are performing the type of exercises that raise your metabolic levels so high that you are still burning fat 24-72 hours AFTER you have finished exercising.

So, I’ve still got 7 days to go with the Chloe Ting 2 weeks abs program, but it is something that I will definitely continue doing.

I’m pretty sure this won’t be a daily thing for me, but just completing the 10-minute workout 3 times a week is more than enough alongside my current exercise regime.

I think it’s definitely possible to get a great set of defined abs within the 2-week period, but you will need to be of a certain fitness level before you start.

If you’re not in great shape now (and no matter how much you hate hearing it) then the first place to look is at your diet and nutrition.

Then simply increasing your activity levels until you’re able to perform metabolic-type workouts is your next step.

There’s nothing with performing Chloe’s ab workout as well, but just don’t expect to see fantastic results in just a couple of weeks.

4 thoughts on “Chloe Ting 2 Week Abs (What Does a Gym GUY Think of the Chole Abs Phenomenon?)”