Ditching the dairy and looking for a hip alternative has been all the rage over the past decade. 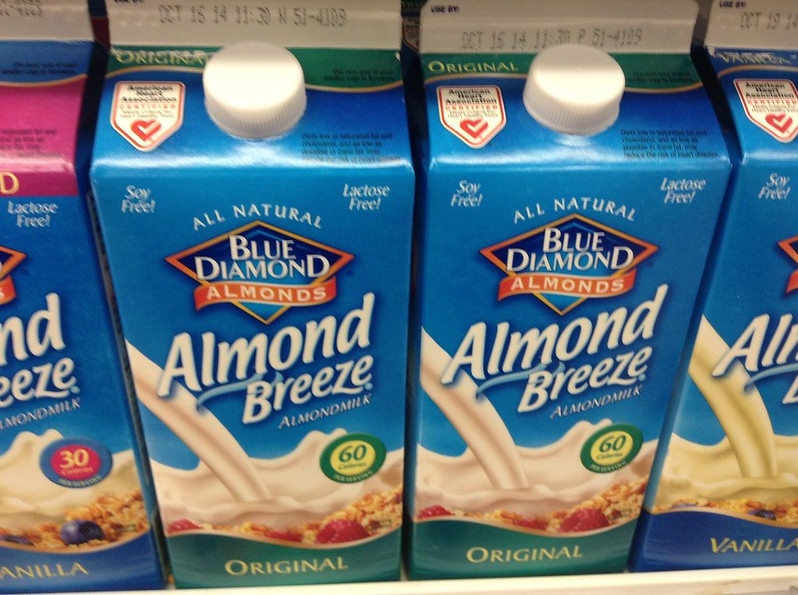 However, today I’d like to focus on one particular substitute and answer the question, “Why Is Almond Milk Bad For You?”

I’ve had my own battle with milk for as long as I can remember.

I’ve never actually been “officially diagnosed” as lactose intolerant, but I think it’s a given (well I’m highly sensitive to it at the very least).

I gave up cow’s milk with my morning oats at the turn of the millennium, but I still enjoyed a “splash” in my tea and coffee.

Plus, I have a penchant for milk chocolate and desserts smothered in cream, so I’ve not exactly been the best follower of non-dairy.

I even went through a stage of drinking goat’s milk.

Admittedly, my skin was much clearer from when I regularly drank cow’s milk, but bloating was still definitely an issue.

I finally decided to go with the masses, but the word “soy” always makes me cringe and recoil in horror, therefore I eventually settled on almond (I’m not a coconut fan you understand).

With that said, the watery tasteless mess that was my morning coffee soon had me questioning almond milk, so I decided to research this non-dairy alternative further.

Why Is Almond Milk Bad For You?

Almond milk has definitely become extremely popular among those who are lactose intolerant and various health nuts (no pun intended).

Many dieticians recommend almond milk due to its wide variety of nutrients and the decreased likelihood of inflammation, which is commonly associated with cow’s milk.

At face value almond milk has some pretty impressive “stats”.

It’s low in calories and nutrient-dense.

Almond milk is high in vitamin E and monounsaturated fatty acids (MUFA), as well as being low in carbohydrates, cholesterol, and saturated fats.

This actually makes almond milk a great replacement to dairy for those of you who are looking to maintain or lose weight.

Almond milk has also been fortified with vitamin’s A and D so it can closely resemble the nutrients found in dairy milk (more on this in a moment).

Unsweetened almond milk also happens to be a great alternative for diabetics and people who wish to keep their levels of blood sugar low.

This is mainly due to the low glycemic index (GI) because almond milk has such a low content of carbohydrates (although I’m not particularly a fan of low-carb anything).

So, at first glance I’d have to say No, almond milk isn’t bad for you.

So, why am I even considering writing about whether almond milk is potentially bad for you?

First things first, irrespective of my obvious sensitivity to dairy milk I actually quite liked the taste.

Okay, there is a certain nuttiness to almond milk, but it really isn’t the same.

I’m used to milk having a certain creamy texture and consistency, but this definitely isn’t the case with the almond variety.

In fact, I wasn’t surprised to discover that some brands contain as little as 2% almonds, whereas the remaining 98% is water, emulsifiers, and occasionally the odd-sweetener.

One such emulsifier, carrageenan, which is often added to almond milk in order to produce that much loved “creamy texture”, is associated with gut irritation.

I’ve already mentioned that vitamin A and D is “added” to almond milk, and of course this must be done artificially.

So in effect, even though almond milk is often lauded as being “nutrient-dense”, as it turns out some of these nutrients are artificially added. Hmm, not so impressive now.

Additionally, low-fat and low calories may be all the rage for some of you, but it isn’t for everyone.

The nutrient content of almond milk in terms of low-fat, low protein, low calories, and a lack of certain vitamin’s means that it isn’t an ideal replacement for cow’s milk for infants and adolescents.

In fact, many of these missing elements are essential for cognitive and physical development.

Yet another ingredient that is sometimes added to almond milk is calcium oxalate, which is especially bad news for anyone that is prone to kidney stones.

Calcium oxalate can actually escalate the formation of kidney stones.

Depending on the make of almond milk the additives may also include, sugar, gellan gum, guar gum, sunflower lecithin, locust bean gum, sugar cane juice, rice protein, pea protein, as well as a variety of other ingredients. 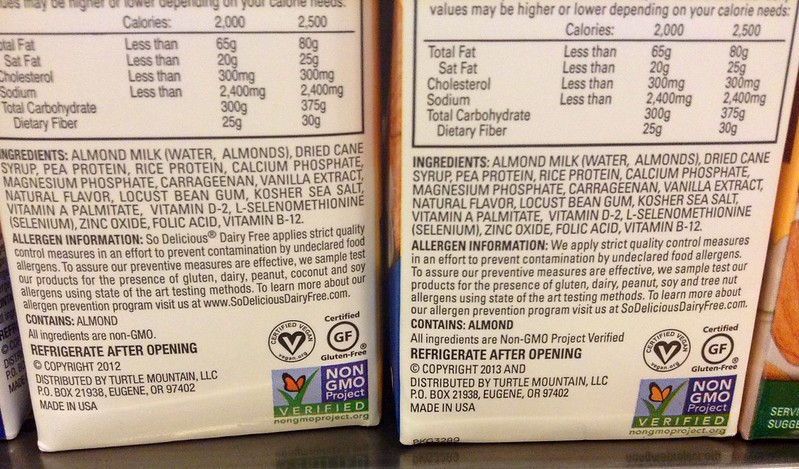 Almonds also happen to be high in estrogen.

There are no actual studies on almonds to prove this, but increased estrogen intake in an individual with a hormone imbalance can lead to acne.

Finally, the most obvious “bad news” about almond milk is that almonds are tree nuts and unfortunately many people have allergies to tree nuts, so almond milk should definitely be avoided if this is the case.

Is Almond Milk Bad For The Environment? (The Ugly) 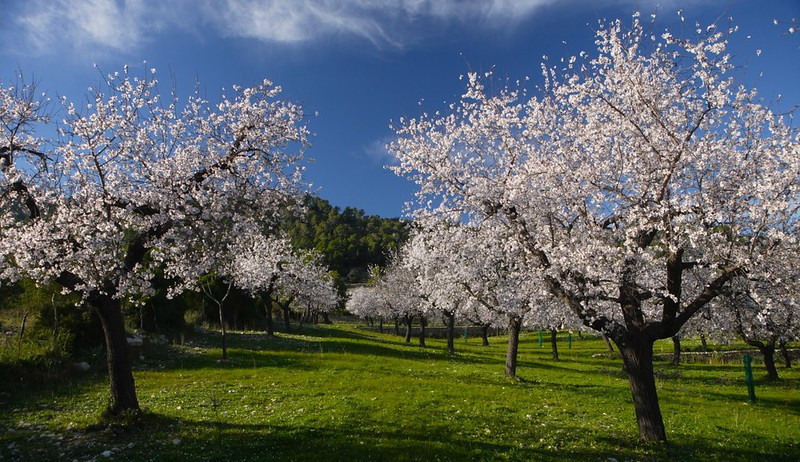 They do say, “you learn something new every day”, and although what I’m about to tell you may be common knowledge to some, it was certainly news to me.

Almond milk has actually been around for a lot longer than most people would think.

It appears it was first mentioned in certain cookbooks in Iraq dating back nearly 800 years.

So, the almond latte may be a fairly new invention, but apparently almond milk isn’t.

With that said, the popularity of almond milk has steadily increased throughout the 2000s and it reached a crescendo during the early-to-mid 2010s.

Almond milk actually surpassed soy as the most popular plant-based milk in 2013, although it appears that many people have become more wise to almond milk in the present day.

The vast majority of almond milk sold around the world comes from California.

This is because California produces around 80% of the world’s almond supply.

It actually takes around 5 litres of water to grow one almond, and approximately 23 gallons of water to produce a single gallon of almond milk.

Now it would be unfair of me to talk about the water usage required to produce almond milk without mentioning that it actually takes around 30 gallons of water to produce a gallon of dairy milk (mainly to grow food for the cows).

Plus, it is estimated that approximately 3% of the global greenhouse gas emissions can be blamed on the dairy industry.

In fact, the production of organic milks uses around 35% less fossil energy than it takes to produce dairy milk.

However, I’m not here to talk about the environmental effects of dairy milk, so let’s get back to almond milk.

Something that became a major cause for concern, as almond milk was having a huge surge in popularity, is that California went through one of the most intense droughts in their history.

In fact, the California drought was pretty much persistent from December 2011 to March 2017 (and these dates tie in almost perfectly with the rise of almond milk’s popularity).

So, due to rising demand of almonds (and of course the Californian drought), farmers started drilling into the ground in order to tap into aquifers (a body of rock or sediment that holds groundwater).

Experts tell us that the overpumping of aquifers can be a huge cause for concern.

They can threaten infrastructures like roads, which have been known to simply collapse into the sunken ground, as well as potentially triggering earthquakes.

Unfortunately, in terms of the environment, this isn’t where the bad news ends.

It is estimated that about 60% of the US population of managed honeybees are used to pollinate the almond trees in California, but approximately one-quarter of the honeybees used for this process end up dying from the various pesticides.

And it is all these various factors that have caused so much controversy around the production of almond milk.

Does This Mean You Should Avoid Almond Milk?

Okay, admittedly this is quite a bashing that almond milk has taken here, but it is still to this day viewed as a great alternative for people who are lactose intolerant, or simply have an allergy to cow’s milk.

I’ve mentioned the many benefits of almond milk, so in reality whether you choose to drink almond milk or not is a personal preference (let’s not forget the potential harmful effects of cow’s milk).

I think it’s important to reiterate that almond milk is not suitable for infants, as they require the fat and protein content typically found in dairy milk.

Almond milk and other plant-based varieties may be introduced after 12 months of age, although it necessary to ensure that the alternative milk sources are fortified with vitamin’s B12 and D, as well as calcium and iron.

Many people have actually turned to producing their own almond milk, which can be created with just two ingredients, almonds and water.

Then again, you may wish to add certain ingredients such as dates, vanilla bean, and a little sea salt, which will help to improve the taste and the creaminess.

How To Make Almond Milk

In my search for a non-dairy alternative to milk the almond variety became my go-to milk.

However, I just wasn’t impressed by the taste and often opted for the sweetened variety.

I knew this wasn’t a great idea, which is what prompted me to research almond milk a little deeper.

My findings have astonished me, but there is still much controversy raging around this plant-based milk.

There are certainly benefits for particular groups of people, although there is a plethora of plant-based and non-dairy milks available nowadays.

Whether almond milk is bad for you or not, well I’ll leave that decision up to you.

As for me, I’ve finally rid any source of milk from my life, once-and-for-all.

It took some time, but I must say I’ve got used to the taste of black coffee now, and even black tea.

My oats do just fine in the morning when mixed with water, although there are many other delightful accompaniments to enhance the taste.

I’m sure I could look for another alternative to cow’s milk, goat’s milk, and almond milk, but it all seems like so much hassle, and I’m just as happy now without any of them.

Thank you for reading.