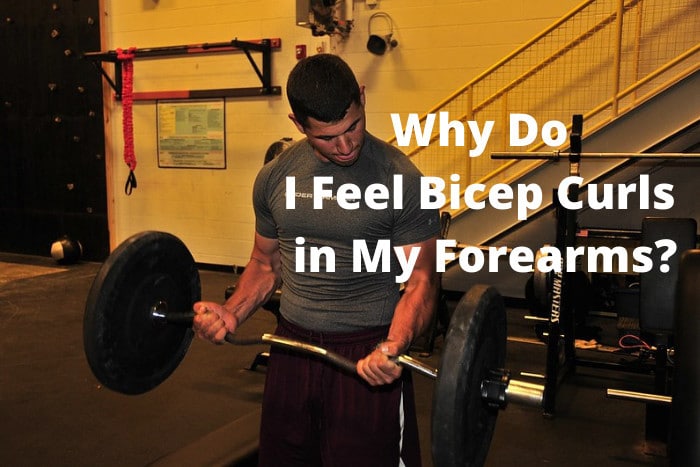 Have you ever asked, “Why Do I Feel Bicep Curls in My Forearms?”

If so, you’re definitely not alone, as this is a very common issue.

Regardless, of whether you’re doing regular, hammer, or incline dumbbell curls, barbell, or EZ-bar curls, you seem to feel it much more in your forearms.

So, what exactly is going on here?

Why Do I Feel Bicep Curls in My Forearms?

The main reasons you feel bicep curls in your forearms is either because you’re gripping the weights too tight or you’re overly flexing the wrists. Both of these things will stimulate the forearms much more during bicep curls. So, you will generally find that the forearms fatigue or “feel” the movement first.

1. You’re Gripping the Barbell/Dumbbells Too Tight

Firstly, I will say that when doing bicep curls there will always be some forearm activation.

In fact, you’ll typically never see someone who has a decent set of biceps, who doesn’t have muscular forearms as well.

So, it’s perfectly natural to “feel” bicep curls in your forearms.

With that being said, if your forearms fatigue much quicker than your biceps, then there are some actions you can take.

For me, the number one issue is typically gripping the bar too tight.

Whether you’re using a barbell, dumbbells, or an EZ-bar, many of us seem to grip the bar as tight as possible.

In fact, this can even be true when you perform pull ups and chin ups.

The “tight grip” will always activate and stimulate the forearms to a far greater degree.

So, try to keep your fingers loose and this will take a lot of pressure away from the forearms.

Much the same as gripping the bar too tight, flexing your wrists (either way) will stimulate the forearms.

In fact, the wrists seem to come into play during bicep curls far more than we actually want them to.

I accept with an exercise such as dumbbell bicep curls that we are aiming for supination of the wrist.

Basically, you are looking to rotate the forearm during the movement so at the top you are in a palm facing upwards position.

However, there is also a tendency to flex the wrist inwards at the top of the movement.

I believe many people think that this additional wrist flexion is “better” for the biceps.

In fact, I think that a lot of us tend to supinate the wrists on dumbbell curls far too late.

You perform the curl, and then at the very top of the move, almost as an afterthought, you supinate the wrists.

However, this “twist” of the wrists should start as soon as you begin to bring the weight up.

Furthermore, if you supinate the wrists too late, this is usually when additional wrist flexion occurs.

It’s almost as though you’re trying to get all the bicep activation in once the dumbbell has come to a stop at the top of the curl.

Unfortunately, all that is happening here is additional forearm stimulation.

3. You’re Working Your Biceps After Back

When you perform your bicep curls will have a huge impact on whether you feel them in the forearms or not.

I guess it does very much depend on your training split, but the forearms may already have had a pretty good going-over prior to you doing curls.

This is especially true if you have a push, pull, legs split, or if you perform bicep exercises on “back day”.

Now, don’t get me wrong, I see absolutely nothing wrong with working biceps in this way, if you are following a particular training split.

However, you need to be aware that both the forearms and biceps have already had a fair amount of training already.

Hence, by the time you get to your curls your arms, especially your forearms, are already going to be fairly fatigued.

A typical pull day may involve:

And this is before you move onto direct bicep work.

I know for a fact that if I follow a training protocol like this my forearms are going to be pretty pumped before I get my bicep work.

So, I think it’s important to keep in mind what training you have specifically done beforehand.

The Most Effective Science-Based PULL Workout

4. You’re Using Too Much Weight

Let’s face facts, bicep curls are probably one of the most butchered exercises going.

There’s something fascinating about having a huge set of bulging biceps.

You give the impression of strength, power, athleticism, and raw sexual magnetism.

So, you can visit any gym, anywhere in the world, and you will see countless people performing curls.

All in the hope of pumping up their arms and producing an impressive set of guns.

And this unfortunately leads to many people using as much weight as possible, typically too much.

The biceps are one of the smallest muscles in the body that we specifically train, and yet they seem to garner far more attention than the bigger muscles.

My advice is to lose the ego, reduce the weights that you’re using, and then watch your biceps grow.

When you use too much weight on curls you’ll generally find that you end up using momentum and body English to get the weight up.

I can guarantee that you’re probably working your forearms much more than your biceps if the weight is too heavy.

5. You’re Allowing Your Shoulders to Take Over

Something that occurs quite often, especially with alternating dumbbell curls, is that the shoulders takes over.

This is even more noticeable if once more you’re trying to curl too much weight.

You may even have noticed this yourself without actually fully realising it.

When you perform alternating dumbbell bicep curls have you ever noticed that the shoulder of the working arm drops?

Then as you raise the weight the shoulder comes back up again.

It’s almost as though you’re leaning to one side, dropping the shoulder, and then performing a shrug with the shoulder.

Okay, that’s a little exaggerated, but hopefully you get what I mean.

However, once the shoulder starts to take over during curls, the forearms will automatically become more engaged.

I much prefer to curl both dumbbells up at the same time.

RELATED====>What is the Best Exercise For Biceps?

Plus, I’ll ensure that my shoulders are pinned back and my chest is pushed out in a military-style pose.

Then I simply curl the dumbbells up together, while really concentrating on using my biceps to raise and lower the weights.

You’ll probably find that you’ll have to reduce your curl weight if you’ve got into the bad habit of allowing the shoulders to take over.

This is also why I like to curl with my back against a wall.

I’ll ensure that my back and rear shoulders remained pinned to the wall throughout the movement.

6. Your Forearms Are Weak

Pure and simple, your forearms could be a weak spot.

Okay, I’ve spoken of people who typically have bulging biceps will usually also have an impressive set of forearms to match.

However, let’s face the facts, many of us tend to focus on bicep work far more than actual forearm training.

In fact, all these people with extremely impressive arms will no doubt perform a lot of other pulling exercises.

So, if you are doing lots of curls and not much else in terms of “pulling” you could find that your forearms are lagging behind.

And this is probably why you feel bicep curls in your forearms.

I don’t believe you have to do any direct forearm work, although it definitely won’t hurt.

For me, I like to stick to a recipe of regular deadlifts, farmer’s walks, and I love doing pull ups with the rope extension.

My forearms get a great workout with all these exercises and it definitely helps with forearm strength and muscularity.

So, hopefully you now understand why you feel bicep curls in your forearms.

In truth, this is mainly down to additional forearm activation by either gripping the bar too tight or flexing the wrists.

However, as you can see there are various other factors at play here.

Check to see if any of these are applicable to you, fix whatever needs to be fixed, and you’ll soon feel your biceps working much harder.

If you’re looking to take your bicep training to the next level then Lee Hayward’s workout program is definitely one of my favourites.

Lee focuses on a variety of “non-bicep” exercises, as well as bicep specialization training.

The perfect formula for producing a set of great looking guns.

You can check out what I thought of Lee’s workout program in my Blast Your Biceps Review.