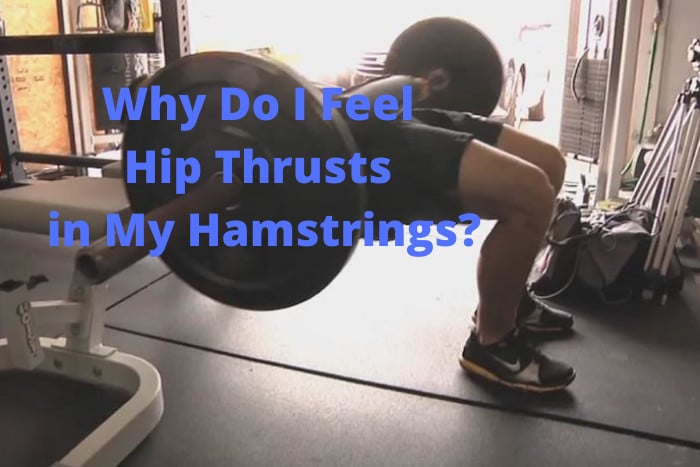 I absolutely love hip thrusts, but fairly often, especially when fatigued, I tend to feel them in my hamstrings.

We all know that hip thrusts are probably the best glute exercise there is.

However, there is a tendency to feel the movement in the hamstrings, as opposed to the glutes.

The following tips will help you to get back on track and fire up those glutes once more.

Why Do I Feel Hip Thrusts in My Hamstrings?

The most common reason for feeling hip thrusts in your hamstrings is the position of your feet. If your feet are too far out you’ll typically feel the movement more in your hamstrings. The closer in the feet are, the more the quads and glutes are activated. You can also turn the feet slightly out for further glute stimulation.

1. Play Around With Foot Placement Until You Hit The “Sweet Spot”

Firstly, I will say that hip thrusts, although primarily a glute exercise, will also hit the hamstrings.

So, it’s perfectly normal to feel some hamstring activation with the movement.

That being said, I know only too well that it often feels as though you’re completely targeting the hamstrings with very little glute stimulation.

What worked for me was playing around with my foot placement until I hit a “sweet spot”.

Basically, the further your feet are away from your butt, the more you can expect the hamstrings to be activated.

By bringing the feet closer in you typically target the quads more, but this also leads to more focus on the glutes as well.

You should also try hip thrusts with the feet slighter wider apart.

Plus, you could turn your feet out ever so slightly in the same way that you would with a barbell back squat.

All of these slight variations in foot placement will help to focus on the glutes a lot more.

Unfortunately, our bodies are all different, so what may work for one person won’t work for another.

So, it is a case of playing around a little with where your feet are until you finally find a happy medium.

I even know of some people who place their feet on a slightly raised platform, such as an aerobic step.

Just find what works for you.

How to Hip Thrust

However, with certain exercises, such as the hip thrust, it can help you to target the glutes more.

Posterior pelvic tilt in a standing position will see the pelvis push forward and it will almost look as though you’re leaning back in the upper back and shoulders.

This simple movement of the pelvis prior to hip thrusts will help to increase the mind-muscle connection.

You’ll actually find that practicing this movement with the pelvis will help with heavy deadlifts, as there is a requirement to ensure the pelvis remains stable.

Additionally, posterior pelvic tilt will also help to slacken the hamstrings, which means that the glutes will automatically have to do more work.

So, if you want to stop using your hamstrings and feel hip thrusts in your glutes, try a little PPT.

3. Activate The Glutes Before Hip Thrusts

Regardless of the exercise, sometimes just activating the target muscles beforehand makes a world of difference.

It’s no different when it comes to hip thrusts.

So, you could perform a few glute-related exercises first just to fire up the glutes prior to your hip thrusts.

Some of the best exercises include:

I also find that bodyweight squats and glute bridges with a band around my thighs does wonders for activating the glutes.

In fact, you could actually keep the band on around your legs when you perform hip thrusts.

This once again will help to stimulate the glutes to a far greater degree.

4. Push Through the Balls of Your Feet Not the Heels

Now here’s something that goes against the “normal” rules of glute activation.

Typically, whenever you perform any type of squat you will feel the glutes working far more if you concentrate on pushing through the heels.

However, it’s important to remember that the hip thrust is a hip-hinge exercise, as opposed to a squat.

In effect, pushing through the balls of the feet works in much the same way as many other hip-hinge exercises, such as the Olympic lifts.

You wouldn’t want to be exploding the hips forward during a Barbell Clean while stuck on your heels.

That being said, just a word of caution, this may not work for everyone.

In theory, pushing through the balls of your feet will activate the quads more, while in the hip-thrust position.

This will mean that hamstring activation is substantially decreased.

So, you should feel hip thrusts in your glutes more.

Now while this may work wonders for many people, I have known of others who have said that this seems to make matters worse.

Basically, pushing through the balls of the feet seems to activate the hamstrings to a greater degree.

So, once again, I urge you to have a play around with this technique and see whether it works for you.

5. Keep Your Head and Neck Forward and Chin Tucked in

You wouldn’t think that the position of your head and neck would make much difference to the glutes, would you?

However, I certainly find that it helps.

I find that if I’m leaning my head and neck back that the hamstrings start to take over.

But, as soon as I lean my head and neck forward, and I tuck my chin in towards my chest, my glutes appear to be far more stimulated during hip thrusts.

I guess this has all to do with overall body mechanics.

This is actually easier to do if you have more of your upper body on the bench.

If you’re simply placing your upper shoulders on the bench there is a tendency to lean the head back and onto the bench.

You will typically do this to provide additional support to the neck, but unfortunately it can take the focus away from the glutes and place it onto the hamstrings.

However, if you have your mid-back and upper shoulders on the bench, you can then bring the head and neck forward and tuck the chin in.

There are no such issues of requiring additional support.

6. Try This Test to Check For Overactive Psoas or Hamstrings

Another reason that your glutes are being inhibited during hip thrusts is an overactive psoas or overactive hamstrings.

However, there is an easy way to test for either.

Lie on the floor in position to perform a single-leg bridge.

Before you raise yourself up, bring the non-working knee in towards the chest and hold it there with your hands.

Now use the working leg to perform a single-leg bridge.

If you find that you can lift the glutes off the floor, but the hamstring cramps, this points to overactive and tight hamstrings.

However, if you are unable to lift the glutes off the floor, this means that you have an overactive psoas.

The way to overcome the overactive muscles is to perform static stretches of these muscles first.

So, initially work out if you do have an issue.

Once you’re aware of whether either your psoas or hamstrings are overactive, simply stretch out the offending muscle prior to hip thrusts.

And there you have it, things to look out for if you feel hip thrusts in your hamstrings.

As I’ve mentioned, the most common cause of not feeling hip thrusts in the glutes is typically the placement of your feet.

So, I urge you to play around with foot positioning until you hit that sweet spot.

With that said, there are a number of other ways to ensure that you activate the glutes better, so try everything that you’ve read here.

You’ll eventually find what works for you.

The glutes are the largest muscle in the human body, so it makes sense that you should regularly train them.

Regardless of your body composition goals, lose weight, burn fat, build strength, gain muscle, the glutes are a great place to start.

Brian Klepacki, of Critical Bench fame, has created a workout program that focuses solely on the glutes.

In fact, he has put together 36 exercises, so you can train at home or in the gym, and still produce a rounder, firmer, and stronger butt.

You can see what I thought about Brian’s workout program by checking out my Unlock Your Glutes Review.