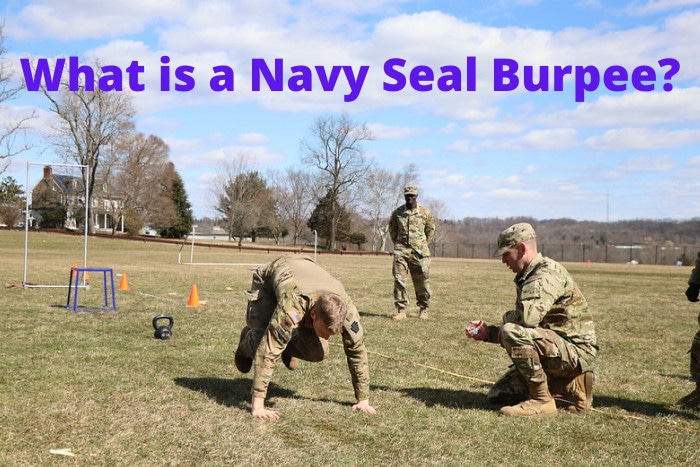 Whenever I decide to take a break from lifting weights, or to focus on bodyweight exercises, one thing’s for sure – I’m going to end up doing lots of variations of burpees.

One particular variation that I absolutely love/hate is the Navy Seal Burpee.

I can just see the confused look on your face, as you ask, “What is a Navy Seal Burpee?”

Don’t worry, I’ve got you covered.

I shall introduce you to this formidable exercise.

I’ll explain exactly what this variation can do for you, as well as details on a totally insane challenge.

Plus, you can also try my own slightly more “down to earth” challenge if you wish.

What is a Navy Seal Burpee?

As with the standard burpee, the Navy Seal variety is a full-body exercise.

I’ve always considered the burpee as both an aerobic and anaerobic exercise.

In other words, it is both a resistance and cardio exercise.

However, the Navy Seal Burpee involves you spending more time in the “down position”, which means it is more focused on being a resistance exercise.

But trust me, your heart-rate and conditioning will certainly go through the roof as well.

The same can be said for the Navy Seal Burpee, but due to the high number of push ups and knee-to-elbow movements, you will have a greater focus in the chest, shoulders, triceps and core.

I guess you could refer to the knee-to-elbow movement as a mountain climber.

So, in effect, one rep of a Navy Seal Burpee will involve a standard burpee, 3 push ups, and one mountain climber.

You could actually turn this one movement into an entire workout by performing a set amount of reps.

I shall introduce you to a couple of workouts or “challenges” in a moment.

These workouts will literally torch calories and provide you with an outstanding full-body strength and conditioning session.

RELATED====>Why Are Burpees So Hard?

The Mysterious Origins of the Navy Seal Burpee

Now you would think that the clue is in the name.

However, it appears that the actual origins of the Navy Seal Burpee are somewhat shrouded in mystery.

The name suggests that this is a Navy Seal exercise, and there are many stories which pertain to this.

In fact, give me a minute and I’ll introduce you to an actual Navy Seal, who has stormed the internet, and become very well-known for his insane burpee-based workouts.

That being said, there are also those who claim that the Navy Seal Burpee is actually part of prison workout culture.

To be honest, this also makes a lot of sense.

Some extremely famous prisoners over the years have become notorious, not only for their crimes, but also their astonishing bodyweight workouts.

Possibly, the most renowned prisoner, and his amazing feats of strength and fitness, is Charles Bronson.

This is the man who claims to have performed 1,727 push ups in an hour, and equally as many squats and burpees.

So, it’s not inconceivable that this fantastic burpee variation could be attributed to an ex or current-serving prisoner.

But for now, non-one is entirely sure where the exercise originates from.

I’ve spoken previously of my own 500-rep burpee workouts, but this is nothing in comparison to what you’re about to see.

He has legions of fans, and almost 90,000 YouTube subscribers (at the time of writing) who literally devour his fitness and exercise-based videos.

Arthur is all about the burpee.

And he performs some insane burpee workouts.

However, the one video that has literally had everyone gasping in astonishment is his 500-rep Navy Seal Burpee workout.

This took him a total of 1 hour and 50 minutes to complete.

You will note that Iron Wolf’s workout (and the correct version) involves running on the spot in-between every rep.

Or what I like to call the “boxer shuffle”.

The workout has been attempted by many, but few, if any, are able to get 500 reps in, never mind doing them within the same time.

Here’s the FULL version of Iron Wolf performing this insane feat of physical strength and fitness.

Attempts At The 500-rep Challenge

The 500-rep Navy Seal Burpee challenge was born, and this is especially true via the online community of Reddit.

One of the most impressive attempts that I have seen was by a Redditor with the handle, SamMartinez93.

Sam (I’m guessing), decided to set a timer for 1hr 50mins and see how many Navy Seal Burpees he could perform in that time.

If you haven’t got time to check out Iron Wolf’s entire video, Sam’s video is just 9 minutes long.

Of course, you could also forward to near the end to see just how many reps Sam managed (and no, I’m not going to ruin it for you).

I’m always up for a challenge, but for now I’ll just stick with something a little simpler, LOL.

I often perform “100s” workouts and this seemed like the perfect opportunity to get another one in.

So, I set about doing 100 Navy Seal Burpees.

I actually went about this by initially performing 10 sets of 10 reps.

However, I found that my rest periods were getting longer and longer as the workout went on.

Plus, it should be no surprise that my chest and triceps were literally burning by the end.

I didn’t keep exact time, but the workout took me around 28 minutes to complete.

And then I discovered another version of this 100-rep challenge that made a lot more sense to me.

Once again, I have another Redditor to thank for this.

Basically, this involves setting a timer for 25 minutes and having a buzzer sound every 15 seconds.

Whenever the buzzer sounds you perform one rep.

Suffice to say, it may not be 500 reps, but this is still an awesome workout.

So, there you have it, the Navy Seal Burpee.

Plus, a number of challenges if you’re up for it.

For me, I actually quite like the 100-rep workout performed over 25 minutes, and this is something I will continue to do on a weekly basis.

I’m sure I don’t need to tell that the burpee, irrespective of variation, is an exercise that has it all.

If you enjoy performing bodyweight exercises, and you want to get into fantastic shape, then make burpees a part of your regular routine.

The burpee happens to be one of only 8 bodyweight exercises that are involved in a workout program that I regularly turn to.

It’s hard to believe, but sticking to just 8 exercises you can actually produce some amazing results.

You can discover more by checking out my Ripped With Bodyweight Review.

2 thoughts on “What is a Navy Seal Burpee? (Plus an INSANE Challenge)”